I am currently working on an animated film called “Suzume no Tojimari.”
I had a press conference for the announcement the other day. But if I’m being honest, I would have felt less stressed if I could have held off on the announcement until production was completed, so I could really take my time on it. Part of the reason I held the press conference anyway was because I wanted to tell everyone what I’ve been working on, but more than anything, I personally wanted to make it a “theatrical release.” I wanted to tell people who work in the film industry, “I’m working on a film like this,” then ask them, “when it’s finished, will you play it on a theater screen?”” Nowadays, we can watch all kinds of movies through online streaming services, but I still think that there is a kind of “cinematic experience” that can only be found in theaters, and that it still has value.

Now, setting the inside story aside, the creation of this new film has been very tough. As I work on it, I often find myself thinking about what a difficult film I’ve started (although the film itself will be fun and entertaining!).

When I think back on “Your Name.,” leaving aside the production work at the studio, I don’t remember having this much trouble laying out the film in storyboards (or maybe I just forgot). It may be because that film was a sort of culmination of my life’s work. Then I felt like “Weathering With You” was like an extension of “Your Name.,” so I didn’t have much trouble with that either (or maybe I just forgot).

In contrast, for this new film, I sometimes feel uncomfortable, as if I am trying to picture something I do not have in my mind to begin with. I feel as if I am walking in the dark without direction, memory, or know-how. I think I’m putting in all the effort to make the film good enough, but I’ve been finding myself wondering if I’m just not qualified or capable enough.

There is only one consolation for me. One thing that I know for sure.
That is the fact that as long as I keep writing even just one word or drawing one line every day for years, the film production will eventually be finished. Even if I don’t want to or cannot do it adequately, I will write and draw every day continuously. Experience tells me that in the end, that is all I need to keep doing. Twenty years as a filmmaker hasn’t made me much better at filmmaking, but it has taught me that much.

That’s what I’ve been telling myself as I sit at my desk for the past year. I wonder how you spent your time. Let’s hope we all will walk in a brighter way in 2022. I hope you are looking forward to watching “Suzume no Tojimari”.
I wish you all the best in the new year! 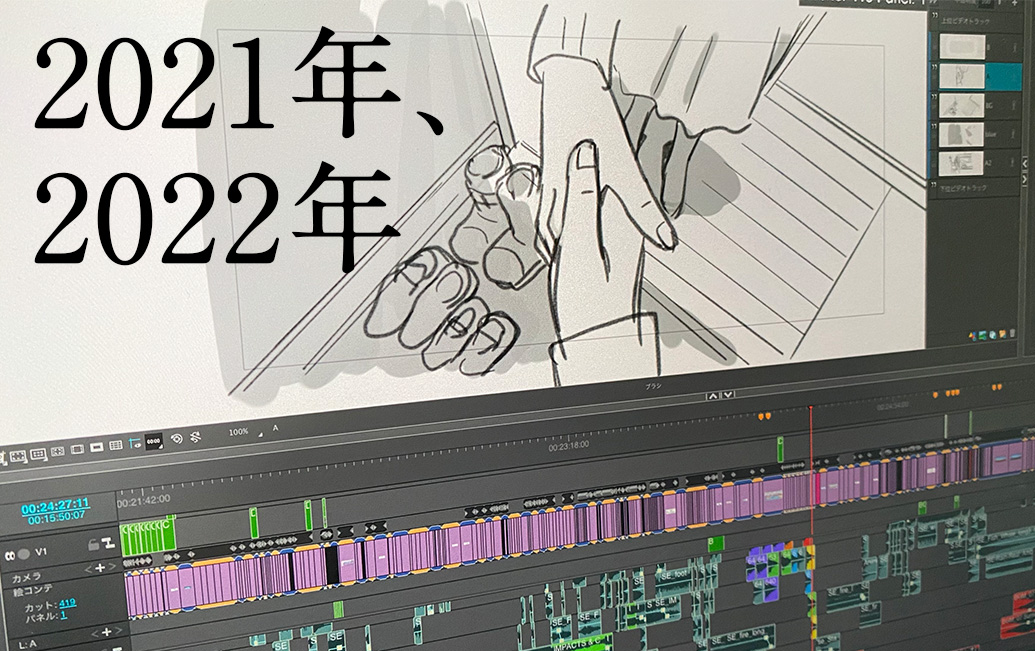